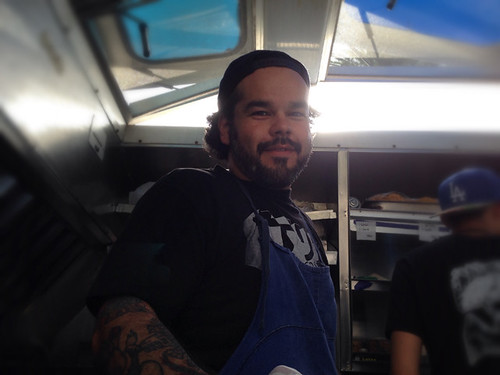 I’ve known Chef Wes Avila for a few years, but had YET to try his award-winning Guerrilla Tacos. 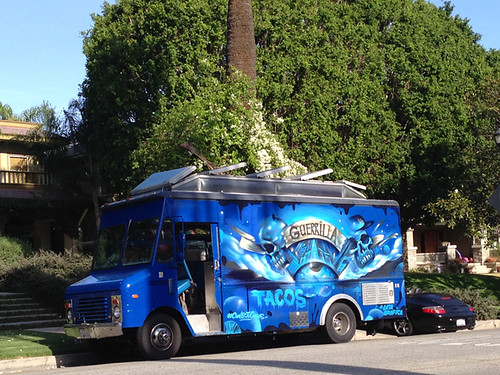 What a wonderful surprise to see the Guerrilla Tacos truck set up for Ruth Reichl’s recent book party! 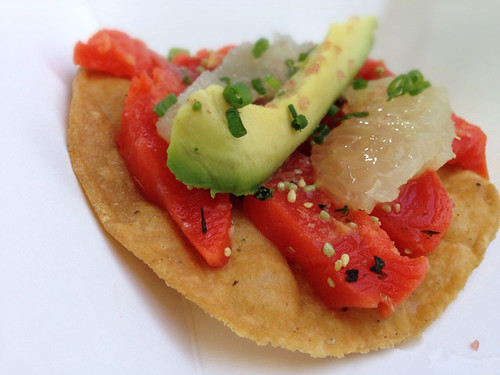 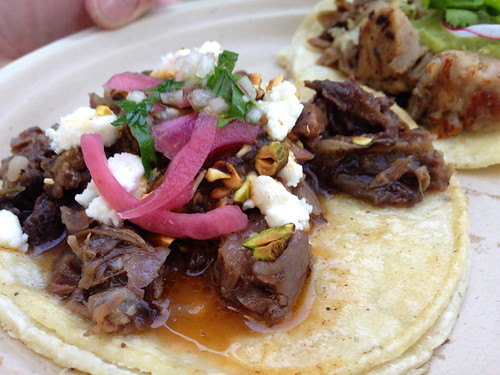 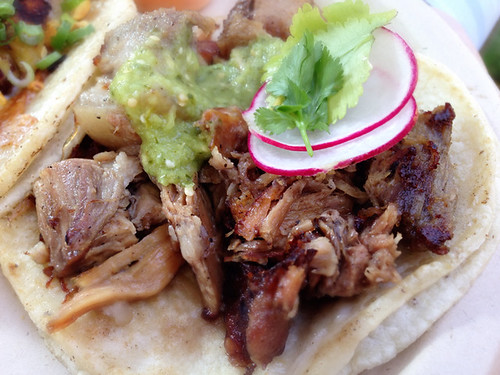 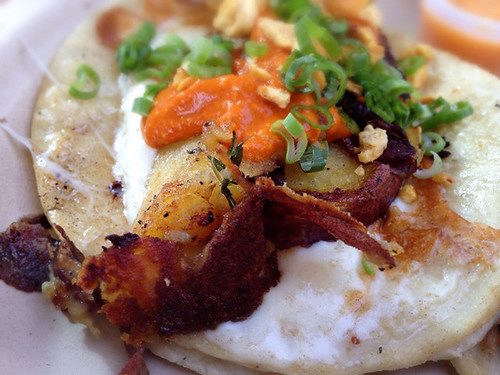 Taco Of The Year

Filed under Eating Out, Food Trucks

A Big Heart-On For Lardon!

Yes Virginia, there is a BACON TRUCK

The Bacone: 3 strips of bacon, served in a cone

The Baco: Potatoes and cheddar in a bacon shell served with horseradish bacon sour cream

Cannot not wait to try BREAKFAST!

All my Get Your Lardon Photos

I first tasted Chef Debbie Lee’s “Korean Pub Grub” back in April during her guest-chef stint at BreadBar LA. Not only did I fall in love with her fun take on what I called “post-partying eats”, but I instantly felt like she was an old friend. Debbie’s effervescent personality will have you smiling as you try deciding which bites to try first (hint: the Bacon Wrapped Rice Cylinders!). Make sure you peek inside to say hello to cutie-pie Kelly as well! Yes, Ahn-Joo’s grub is perfect to soak up a few too many cocktails on a Friday night, but it’s also great for a quick afternoon lunch before heading back to the office.

Enjoyed with my good friend @CharlesGT

I first met Manila Machine’s Nastassia at Eat My Blog, and when she mentioned her new truck would be hawking SPAM SLIDERS, I just knew I had to go support! Read more about L.A.’s first Filipino food truck on Joshua @FoodGPS Lurie’s blog> “L.A. Bloggers Launch Manila Machine Food Truck”

SPAM Sliders (usually comes topped with a fried egg, but they were out). Didn’t bother me… because I am all about the salty “meat”!

I also ordered some Chicken Adobo to take home for Peter, but I forgot to take a picture. Described as “A Filipino classic. Chicken braised in vinegar, soy sauce, garlic, bay, and black pepper. Fragrant and savory. Served over steamed jasmine rice.” (Peter LOVED)

My friend Sofia was taking orders that day. She is 10 years old going on 30 (smart-as-awhip!).

Also enjoyed with my good friend @CharlesGT (same afternoon as Ahn-Joo! Pigged OUT!)

Oh the brilliance of the “Bustaurant”… a double-decker food truck with dining on the top level! I’d seen the Worldfare truck on several occasions, but finally got to enjoy the Bunny Chow delights at Ben Anderson’s Summer Rosé Party. Ben is the West Coast Regional Rep for Rosenthal Wine Merchant, so the afternoon was filled with heaps of beautiful Rosé wines, and even better… a surprise visit from the awesome Worldfare Bustaurant! (Thanks so much Ben!) (Read more about Worldfare here)

Inside the Truffle Mac and Cheese Balls

If you missed it, check out this recent post about Ta Bom (fantastic Brazilian street eats!)

Recently, I’ve been spending a lot of time with Bill Esparza aka StreetGourmetLA. We met last year at Jonathan Gold’s Cocktail Party, and ever since then I’ve wanted to tag along on one of Bill’s many “street food” adventures. I’ll be writing a full post about my “non valet” evenings with Bill soon, but first a look at my new favorite food truck!

Ta Bom Brazilian Food Truck is owned and operated by Ilse Marquis and her twin daughters, Jaquelin & Juliana Kim (gorgeous girls… part Brazilian and part Korean). When Bill sent out an email recently to organize a tasting for a few bloggers, I was thrilled that I was available to join the fun.

In Portuguese, Ta Bom means “It’s Good!”, but the food that came out of Ta Bom truck wasn’t just good… it was FANTASTIC. I even broke my “no carb” rule for the afternoon! Honestly, I’m not very familiar with Brazilian cuisine, and mostly thought it would be a beef fest or something (which I would LOVE). Thank goodness I had Bill there to explain that the bites we were devouring, were some of the most authentic Brazilian flavors he’s experienced outside of Brazil. The recipes are from the southern state of Santa Catarina, and if you haven’t tried it yet, follow Ta Bom on Twitter and chase this truck down now!

Guarana Antarctica (my first try… loved it… will have to try with vodka!)

Bill inside the truck with Ilse, Juliana and Jaquelin

The Truck (and Matt!)

The Kogi Taco Truck made me miss being in my twenties. Especially over the last couple of months, since I started following their Twitter updates on my cell phone. Late at night I’d be in bed reading a book, and have to stop so I could see the incoming Twitter text: “10PM-2AM@The Brig – Abbot Kinney and Palm in Venice”. I couldn’t stop wondering, “Who ARE these people partying EVERY night of the week, chasing down the Kogi taco truck at 2AM?”

It was sort of depressing, because I wanted to be out there chasing the truck too, but then again, I didn’t want to be OUT THERE chasing the truck (or chasing anything for that matter). The Alibi Room in Culver City actually runs a Kogi kitchen (monday thru saturday), but still, I had no desire to fight rush-hour traffic and wait in a ridiculously long line, just for a TACO.

I admit it, at 45 years old, I’m definitely more of an OpenTable, “reservations a month in advance” sort of eater these days, but of course, that wasn’t always the case.

Shortly after I turned twenty-one, I moved to Pacific Beach in San Diego, then spent the next couple of years partying non-stop with my friends. Our days consisted mostly of working in retail during the day, sunning ourselves on our days off and planning “girls night out” EVERY single night of the week.

Most of us were on pretty tight budgets, but we knew which beach bars served free “happy hour” food (drinks bought by the fellas), and it usually consisted of nachos, taquitos or plates of bacon-topped potato skins. Remember when potato skins were the cool, new appetizers?

Our favorite drinking holes back then were places like the Beachcomber or the Pennant, and we never missed a Tuesday $1 Margarita night at Diego’s on Garnet Avenue. Quick trips to Mexico for cheap lobster and margaritas were followed by dancing all night at the local clubs.

These nightly adventures always ended with a trip to Roberto’s Taco Shop in Mission Beach, which was steps from the shore, next to the aging Big Dipper roller coaster. The giant, carne asada burrito was my favorite and I always ordered it with extra guacamole. I can’t recall ever eating there during the day, or going there sober for that matter, but back in the day, Roberto’s Taco Shop was MY Kogi.

If you’re not familiar with Kogi BBQ, then you probably don’t live in the Los Angeles area. The first time I read about Kogi was on an EaterLA/Lesley Balla post back in December (boy, do I miss her on Eater these days). Ever since then, Kogi has been the “it” taco truck in the city, offering the flavor of spicy Korean barbecue, conveniently wrapped in a fresh tortilla. Kogi gained even more followers when they started using Twitter to communicate upcoming locations with their customers. It was a simple (and brilliant) way for Kogi to keep in contact with hungry, usually late-night, eaters.

Last Thursday, I just happened to be reading the Kogi website, when I noticed a post titled, “What 20 Bucks Can Buy You”, and was thrilled to learn that it was for a fundraiser in nearby Burbank the same evening. The Gina Alexander Philanthropy Project partnered with Kogi to offer All-You-Can-Eat Kogi tacos for $20, with the proceeds benefiting the Center of Hope Village (for abused children) in the Philippines.

I called Peter and made sure he could make it home early so we could finally try the now-famous Kogi tacos together. Just last week the Kogi truck had been on the Fox lot where he works and he hoped to try it then, but the line was just too long for a my workaholic husband, who doesn’t like to break for lunch anyway.

We arrived at the event 30 minutes early, and after paying our $20 donation (each), we headed for the Kogi truck line, quite pleased to be very close to the front. It was another hour before the truck actually showed up, but there was plenty of entertainment to keep us occupied (photos below), and we didn’t mind because it was all for a good cause.

Peter and I both ordered two Korean Short Ribs and one Spicy Pork. The All-You-Can-Eat Kogi Taco offer, was limited to three at a time, which made sense because when I looked back at the line behind us, there must have been at least 150 hungry people waiting on the street.

The tacos were terrific (LOVED the spicy pork), and we were content with the three that we tried. Of course if we didn’t have to get back in line and wait again, we would have definitely made it a furious pig-out session, but mostly it felt good to make the donation (Peter later told me he slipped them another $20), and to FINALLY get a taste of the Kogi phenomenon!

Afterwards we headed home, took our pups for their evening walk, and then I fell asleep next to my husband reading my favorite, new book. And guess what? I was tickled pink, NOT to be in my twenties again.

Peter saving our spot in the Kogi line

DJ Derek Basco entertaining the kids (and us grown-ups too!)

Waiting for the wrestling event

Peter almost up to order… and check out the line behind him.

Thurs, June 25
Thurs, July 30
Thurs, August 27
You must rsvp for your name to be placed on the list.
Email/RSVP or Get more info by contacting
gapp@ginaalexander.com

Center of Hope Village in Philippines