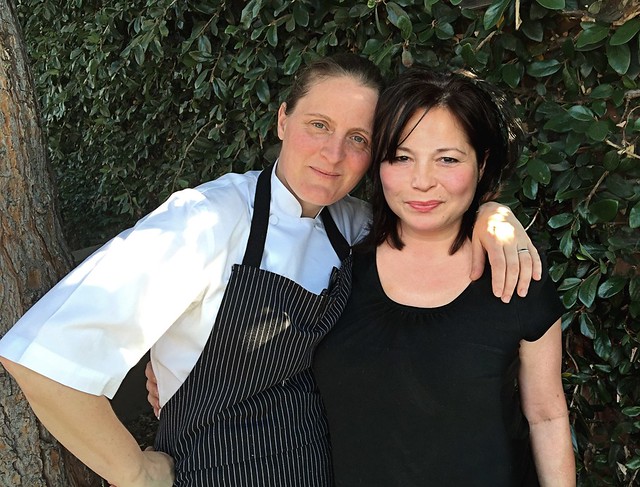 Chef April Bloomfield‘s latest book, “A Girl And Her Greens” is out now, and the recipes look fantastic. I’ve made the mushroom on toast (Madeira Cream Sauce & Mushrooms) several times already. Also, if you haven’t seen her on “Mind of a Chef” (season 2), I highly recommend it. It’s available on iTunes here.

It may sound strange, but since going out to nice restaurants together is our “thing”, I tend to get very jealous if my husband Peter eats out without me. Especially if it’s a restaurant on one of my “must EAT wish lists”.

When Peter has a business dinner here in town and I’m not going with him, he makes sure to eat somewhere we’ve already been to before. This way he knows what to expect from the restaurant, but it also assures him that he’ll be welcomed home afterwards. But when he’s away on business, I tend to ease up on my culinary envy… or at least I TRY.

Peter’s official job title is “Senior Vice President of Creative Advertising for the Theatrical division of 20th Century Fox”. When people ask me what he does for work, I keep it simple by saying, “he makes movie posters”. What the job actually entails isn’t really all that simple.

Before working with various design firms and print shops around town (as well as his team at the studio), Peter has to travel to film sets to spend time with the film makers, photographers, and of course actors (plus their many handlers)… to GET THE POSTER SHOT. He’s looking for that one image that will SELL the movie, but also other photos for publicity, teaser prints, theater art, billboards, bus shelters, bus sides, standees inside theaters and newspapers (yes, they still print those!).

Peter recently had to fly to New York to work on “Wall Street 2” (Gordon Gekko is back!). Unfortunately I couldn’t go with him since I need more than a few days notice to organize a house and dog sitter (three needy rescues plus our neighbor’s dog).

When he called from Manhattan on Friday and said he had ordered room service for dinner, I laughed and said: “are you KIDDING me? You’re in New York. Go OUT!”

Since his visit was unplanned, there was no way Peter would get a table at a place like Corton or Momofuku Ko (two of many on my to-do list) so I suggested he try Graffiti restaurant in the village. The restaurant’s chef / owner, Jehangir Mehta, was my favorite contestant on “The Next Iron Chef”. He made each episode so interesting with his cunning and clever moves!

Peter called Graffiti and was told they were booked up, but since he was a party of one the restaurant would accommodate him. After ditching $100 room service dinner, he grabbed a cab and headed for the tiny 470 square foot restaurant, and was shocked to see chef Mehta greet him at the door (since the finale of Next Iron Chef hadn’t aired yet). Peter was seated with (in his words) “three lovely Graffiti veterans: Megan, Marisa and Galit”.

So, there was my husband… out on the town in New York, dining with three women that he just met in a cool village eatery. Was I jealous? You bet your sweet cheeks I was… jealous of the FOOD. I’m sure his “dates” were lovely, but my heart was a little bit broken over missing Chef Mehta’s Braised Pork Buns and Pickled Ginger Scallops!

The next morning Peter called and I almost didn’t pick up (but I did). He wanted to know where he should have brunch that day (he slept in because he was so FULL from dinner) and being the forgiving wife, I suggested April Bloomfield’s Breslin. We both loved eating at the Spotted Pig (also by Bloomfield) a few years back, and the Breslin is her newly opened hot spot.

Peter raved about the succulent Lamb burger, then was off to spend the afternoon with famed photographer Annie Liebovitz, while she photographed Shia Laboef and Michael Douglas.

I know… what a crazy world. I sometimes I forget he’s there to work, not eat.

Graffiti’s Braised Pork Buns, Apricot Chutney
Peter’s Notes: I took bad photos (iPhone camera and low light… not a good combo). Thanks Marisa for taking the only decent photo of the night – the braised pork buns (above) which was my favorite bite of the evening!

Peter with Chef Mehta himself!

Breslin’s Lamb Burger
Peter’s notes: Crumbles of goat and feta cheeses, thin swirls if small red onions and cumin mayo. Messy juicy good. Didn’t get any on my clothes but I could feel it oozing out the corners of my mouth.

Thanks Peter! Can’t wait to actually EAT at Graffiti and Breslin SOMEDAY soon!