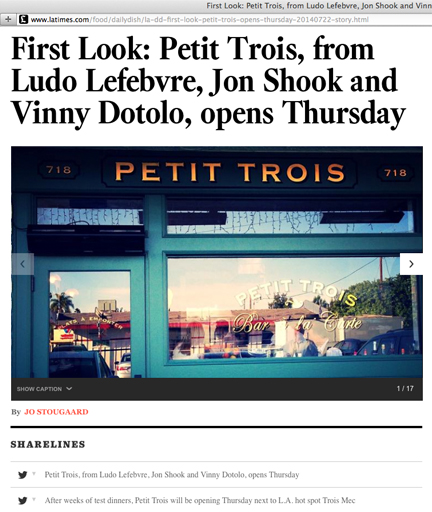 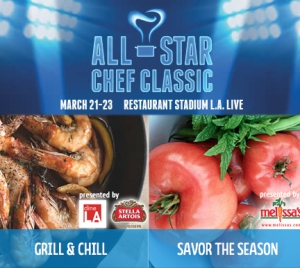 Last weekend Peter and I attended the first-ever All-Star Chef Classic in downtown Los Angeles. It was such a spectacular event for chef fans like us, and even though we only made it to two out of four events (having just returned from Scotland), we both had a super, delicious weekend. 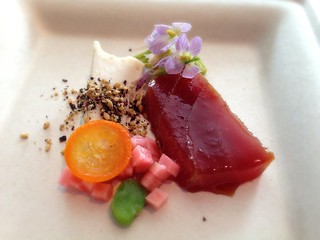 We are SO looking forward to making it to ALL the events next year!

All my photos from “Grill and Chill” and “Savor The Season”

I’ve had the pleasure of eating at Trois Mec restaurant several times, and before each visit I secretly hope the potato pulp is still on the menu. Ludo serves it with brown butter, bonito, onion soubise and salers cheese. Of course brown butter makes anything taste better, but it’s Ludo‘s brilliant use of bonito flakes (aka katsuobushi) that takes the dish to a whole new level. No wonder Jonathan Gold named it one of his 10 best dishes of 2013!

My new favorite (besides the potato) is the luxurious plate of avocado, citrus and crab. Check out the photos from a recent visit here.

Trois Mec
716 N. Highland Ave
Los Angeles, CA 90038
There is no phone for Trois Mec.
For ticket inquiries email info@troismec.com
Website
Note: Trois Mec is an incredibly difficult reservation to get, but absolutely worth the trouble. If you’re interested, review the FAQ page here.

Read all about it over at L.A. Bites Hunger!

What a lineup! Ludo stars along with two of my long-time culinary heroes… BOURDAIN and NIGELLA! 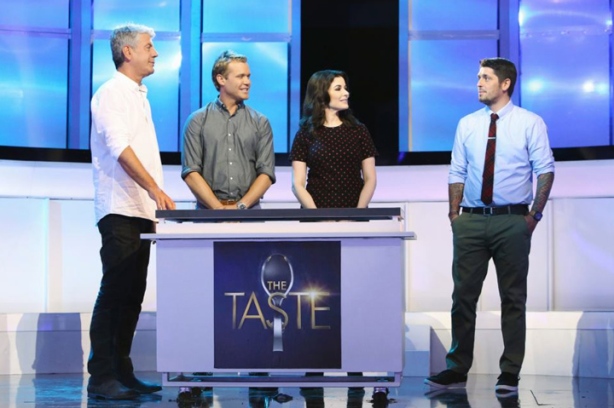 Four culinary masters get down to what really matters, The Taste! Anthony Bourdain, Nigella Lawson, Ludo Lefebvre & Brian Malarkey will each coach a team of 4 cooks, consisting of professional chefs and home cooks whom they will hand pick based on a blind taste challenge. Throughout the season, their mentors will prepare them for challenges in creating dishes that will ultimately be judged by the superstar chefs in blind taste tests. One cook will be left standing to take home The Taste trophy along with a new Ford C-Max and $100,000!

LudoBitches will be live-tweeting during each episode. Follow us at @LudoBitches!

Photos via The Taste

My photos with Ludo

“LudoBites: Recipes and Stories from the Pop-Up Restaurants of Ludo Lefebvre” will be released October 9, 2012. I tested some of the recipes this past week (photos below) and have so enjoyed reliving dishes from his pop-up dinners around Los Angeles.

From the online book description:

The cookbook chronicles of the visionary, charismatic chef Ludo Lefebvre and his cult hit pop-up restaurant, LudoBites, worshiped by critics and foodies alike.

Ludo Lefebvre is a culinary prodigy who worked at his first three-star Michelin restaurant at age fourteen. By twenty-five he was running his own kitchen in Los Angeles—winning accolades for serving the most imaginative, forward-thinking food the city had ever seen. In 2007, he traded fine dining—with its endless pomp and bottomless resources—for the freedom to cook outside the box, even if it meant sacrificing his skilled kitchen brigade and drafting an eight-year-old to clean green beans and separate eggs. (Amazon)

Note: Ludo (and his wife Krissy) are dear friends. But that doesn’t stop me from being a HUGE fan of Ludo’s cooking or LudoBites the cookbook! I’ll continue to try out recipes and share the photos on twitter.

Vietnamese Vinaigrette (page 261). I spooned it over pan-fried tilapia and rice.

Brocamole (page 22). Broccoli instead of avocado. We ate it with pita chips.

Époisses (my favorite stinky cheese) Risotto w Egg Yolk (page 340). Ludo made this for dinner a few days before I had the cookbook. I’m happy to say that mine tasted just as good! We used leftovers for baked risotto balls the next day.

Watch Ludo on Anthony Bourdain’s No Reservations: Burgundy (video recap). You get to see his charming side and meet his grandma!

Ludo Bites America on the Sundance Channel (available on iTunes)

Order the book on Amazon

My photos of Ludo

Watching Ludo watch himself on No Reservations!

Chef Ludo PLUS Pork, for one night only? No chance I was going to miss this dinner!

Menu (each table was given all four sides, served family style)

Ludo’s porchetta… just out of the oven!

Porchetta Sandwich at our table

We loved it… we really, really LOVED it!

Obviously… so worth the wait!

How to make porchetta by Serious Eats (slideshow)

my last bite…
Create a free website or blog at WordPress.com.