The Bashu Fish at Fang’s Kitchen in Monterey Park is wonderfully numbing and spicy. Jonathan Gold (L.A. Times) wrote, “The fragrance of chiles, garlic and pickly spice is overwhelming. But the flavor is impossibly mild, a bit of tingling from the Sichuan pepper and a bit of heat from the red chiles…” (full review here).

I’ll be going back to enjoy it again SOON. My lips are already trembling… 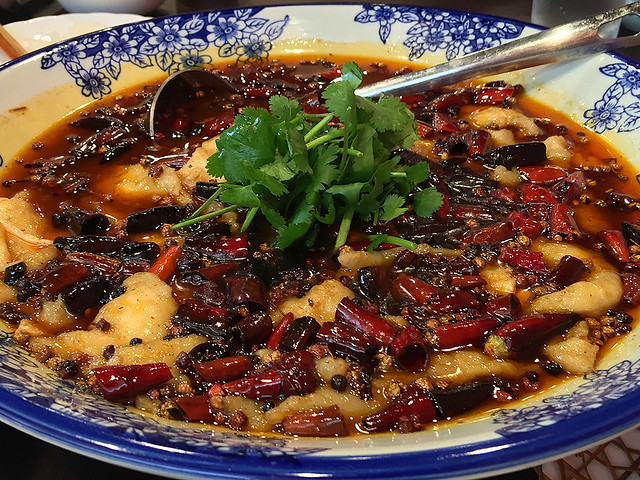 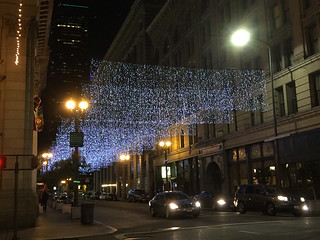 Peter and I both love chef Josef Centeno‘s cooking. With four restaurants in downtown L.A., we often have a hard time deciding which one to eat at. There’s Baco Mercat (home of the bäco) and Bar Ama (with the best queso in town). High-end Orsa & Winston is currently offering a fantastic Yakitori-Ya menu (through March 2). Josef’s newest eatery, Ledlow, recently won a rave Jonathan Gold review. All the restaurants are within walking distance of each other at 4th and Main, and all are simply fantastic.

After twenty years together, it’s not easy to surprise my husband of 18 years. But for his birthday last month, with the help of Josef and his fiancee (my friend) Betty Hallock, we did just that. I joked to Betty that I wished I could take Peter to all of Josef’s restaurants for his birthday and she said they had actually been thinking of organizing a restaurant crawl.

I was thrilled when Josef offered to select the evening’s menu, which included two dishes and a drink at each location. To make things easier, since it was four different kitchens and staff, I paid for the evening ahead of time and left a tip at each (45 minute) stop. Many thanks to Betty and Josef for helping me surprise Peter!

Photos from our December 2014 “Centeno Crawl” below: 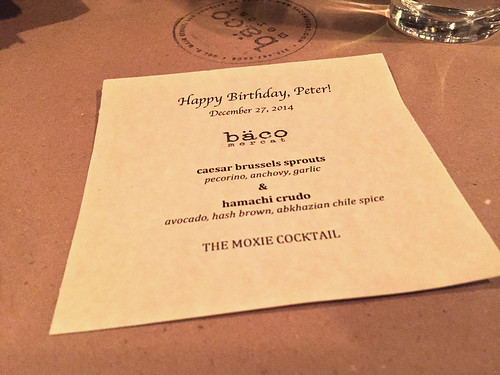 STOP 1: Bäco Mercat
Peter was shocked and so thrilled to find the first “Happy Birthday, Peter” menu waiting at our first stop, which was Baco Mercat. 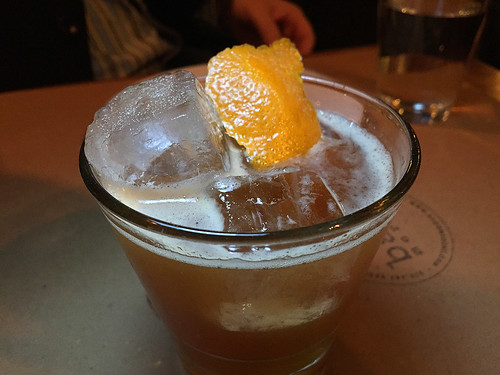 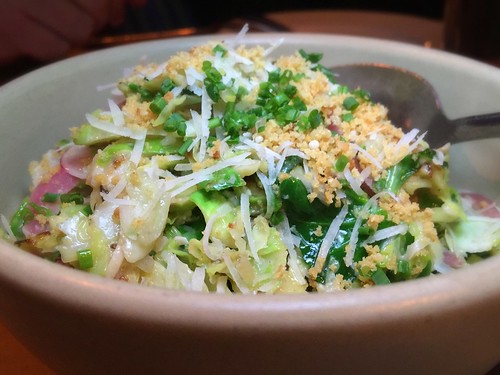 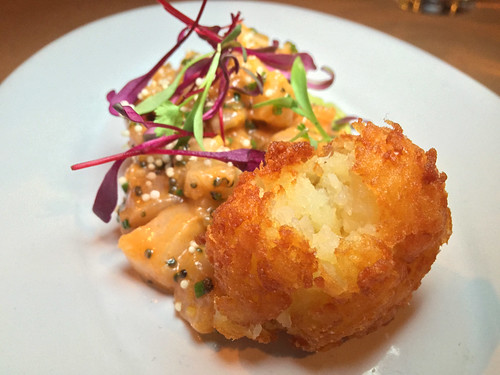 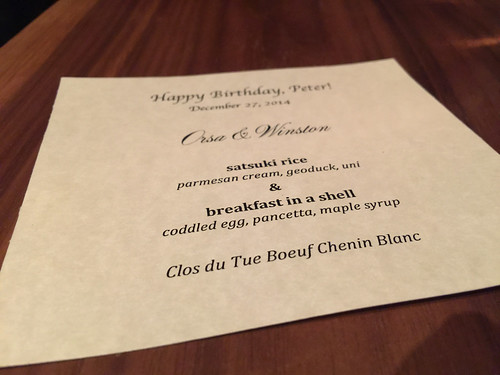 The menu waiting at Orsa & Winston. 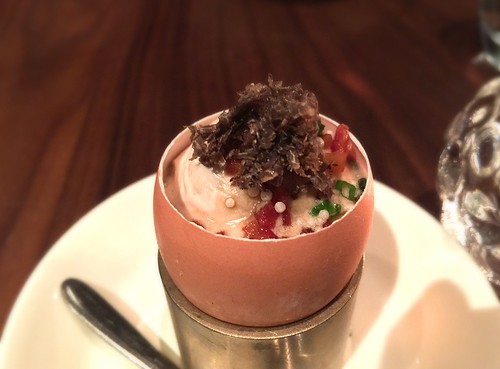 Breakfast In A Shell with Coddled Egg, Pancetta, maple syrup at Orsa and Winston. 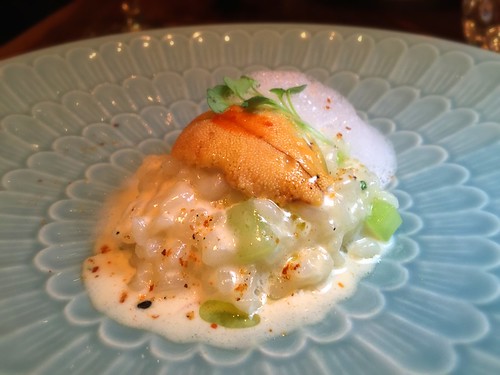 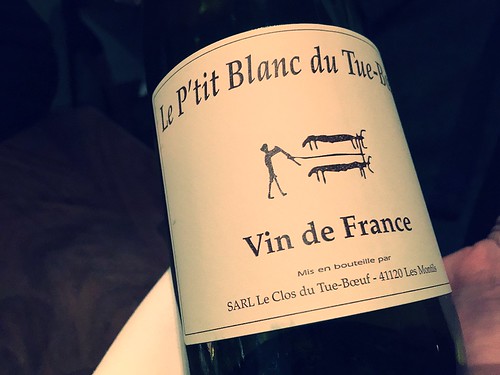 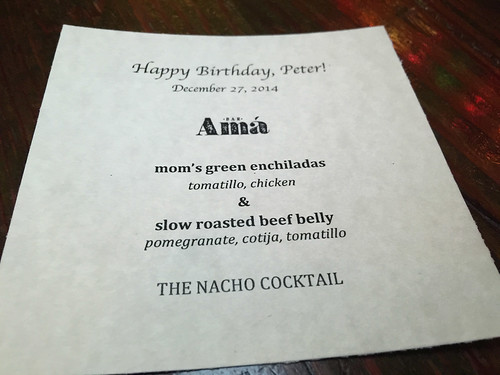 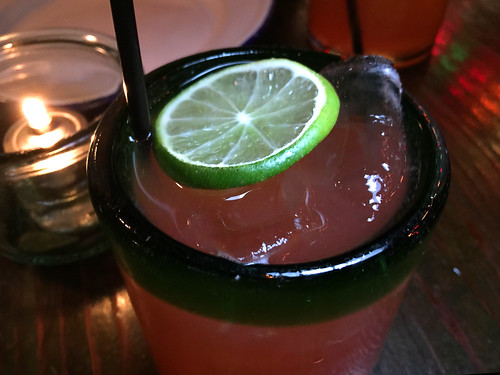 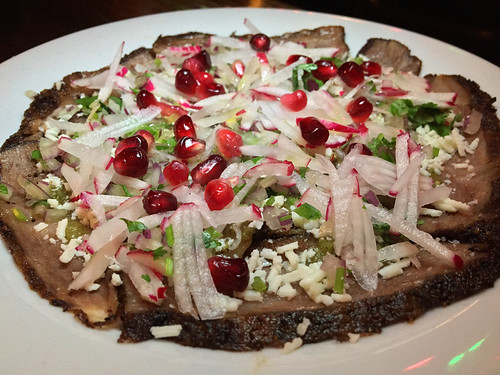 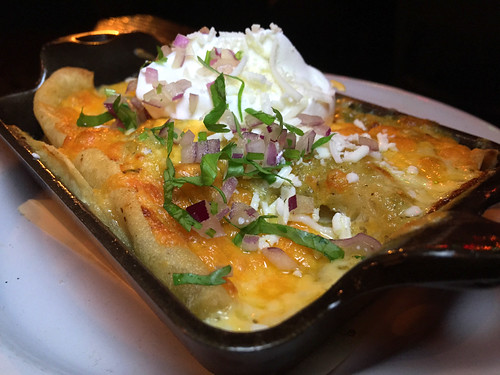 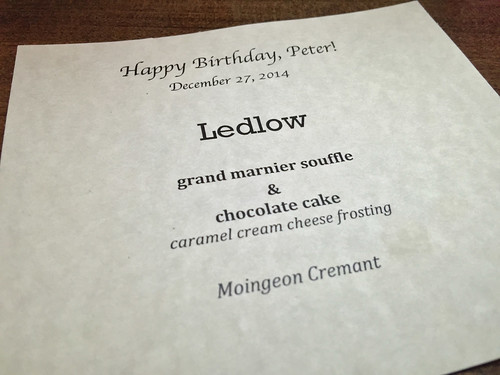 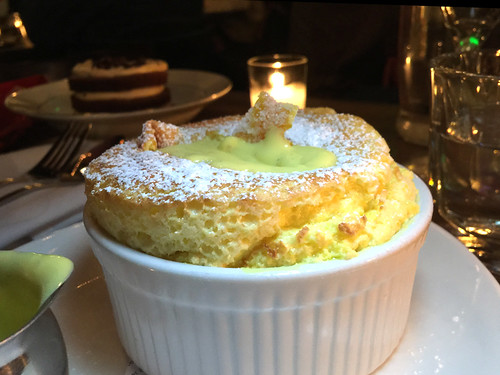 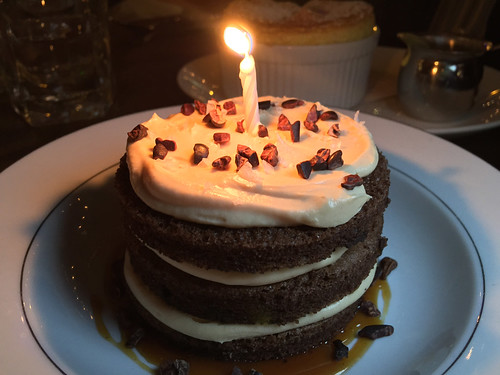 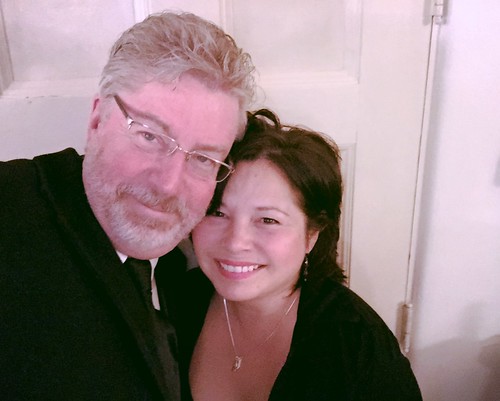 I can’t stop thinking about this lobster paella by Perfect Rocher. It’s only available on Sundays at Smoke, Oil, Salt on Melrose in Hollywood. 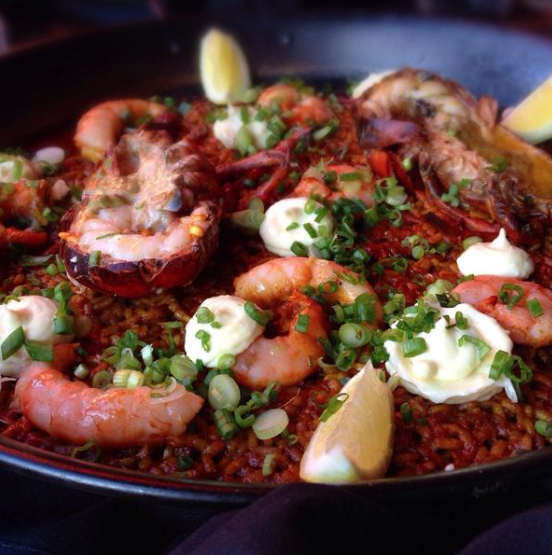 My latest Jonathan Gold scouting report is up on L.A. Times! Tipple & Brine is a terrific new spot in Sherman Oaks. Read my report (with photos) here. 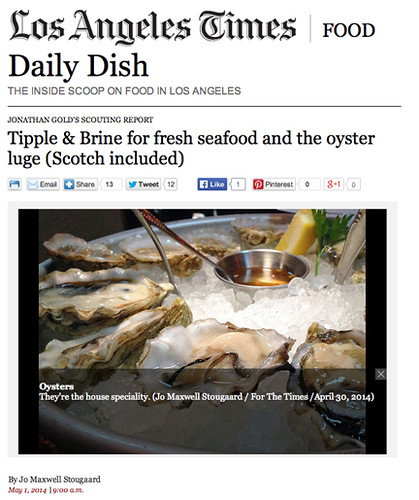 All my Tipple & Brine photos here.

Links to my other scouting reports here. 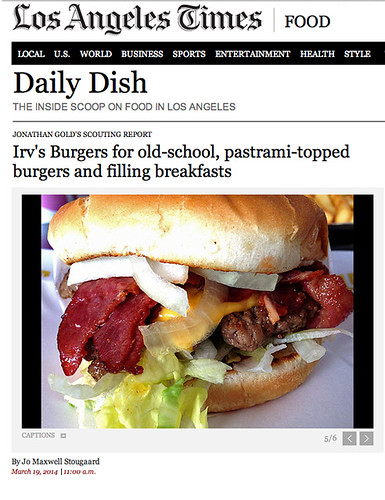 Check out the juicy burgers (and filling breakfasts) at Irv’s Burgers (new location) in West Hollywood. My latest Jonathan Gold Scouting Report at the L.A. Times.

Twenty-five years ago, I pretty much travelled non-stop for both work and pleasure. My ex-husband (we split in ’93) was a pilot for United Express and we took great advantage of free passes with its parent company, United Airlines. Back then (pre-9/11 of course) we had a stack of blank tickets and wrote in any, international (or domestic) destination.

Not only did we fly for free on United  (always on standby), but other major airlines honored the tickets as well. Yearly vacations to Europe (usually the Greek Islands), the U.K. and Japan were peppered in with work expeditions to Africa and the Arctic. My job as a field assistant to an award-winning nature photographer took me from safari tents in Tanzania to polar bear camps near Nunavut, Canada. Yeah, I know… I got PAID for that.

These days I don’t travel abroad too much, at least not as much as I used to. Once a year I visit my dad and step-mum in Scotland, and usually stop off to see friends in London. My husband Peter travels for work on occasion, and although we don’t have children, we DO have a house full of loving dogs.

My limited globetrotting is a separation-anxiety issue. Mostly mine, but the dogs suffer from it too. I hate leaving all of our dogs (currently we have Woody, Ziggy and Maxie), but it’s especially hard being away from my “baby” Maxie. He sleeps next to me every night, so when I travel… it simply has to be worth leaving him.

When Tourism Australia contacted me last summer, inviting me on a ten-day (all-expenses-paid) trip to be a “corOZpondant” (OZ + correspondent, get it?), I thought, “Well okay… THIS IS WORTH IT.”

The ten-day adventure began with previews of the 2014 Melbourne Food and Wine chefs and restaurants, which runs February 28 to March 16.

If you live near Melbourne or are planning a trip to Australia, you still have plenty of time to get tickets. This year, the Festival will celebrate all things water, with special events like MasterClasses led by international chefs including Christopher Kostow from Meadowood in Napa Valley.

In addition to the food and wine preview, I also got to browse local markets, wineries and coffee shops, travel the spectacular Great Ocean Road, and spent an afternoon on a beautiful farm with Dolores the truffle pig!

My Australia wine education continued with a short flight to Adelaide, South Australia to attend the Savour Wine Forum. Before flying home I attended a dinner in the Barossa Valley and shared wine with the legendary Maggie Beer.

NOTE: This is just PART ONE of my Australia adventure. I’ll be posting details and photos of the entire trip here on the blog, so please check back again soon!

My introduction to the generosity of Australia (and it’s people) actually began BEFORE I left Los Angeles. Whenever I travel, I’m especially organized and start packing weeks before the departure date. Guidebook? Check. Passport? Check. “Travel Maxie”. Check. Neck pillow for uncomfortable economy seat? Check. Healthy snack (usually almonds) to eat instead of crappy, airline junk? Check. Sleeping mask, for when your seatmate insists on leaving his reading light on the entire flight? Check!

After arriving several hours early at LAX (Los Angeles Airport), I walked around the terminal preparing myself for fourteen hours in a cramped, economy seat. While I waited to board the Virgin Australia flight to Melbourne (via Sydney), I logged on to Twitter to pass the time. There, a direct message was posted from Aussie chef Luke Mangan. We were introduced online via a mutual friend, and I was hoping to meet him while in Oz, but my trip did not include any time (except the plane change) in Sydney.

Luke asked if I had already checked in for the flight. I replied that in fact I had checked in two hours earlier. He quickly messaged me back and told me to check with customer service because he had me upgraded. It turns out that Luke Mangan was (and still is) Virgin Australia’s official chef.

As boarding announcements began, I ran up to the counter and asked the gate agent if she could check on my seat, which was printed 49G on the boarding card. She asked me why and I explained that a friend might have had me upgraded. With a tilt of her head, and an “in your dreams” rise of her eyebrow; the agent grabbed my back-of-the-plane boarding card and entered my name.

There was a pause, a blank stare, then a forced smile and, “you’ve got SOME friend at the airline” comment before printing out the new boarding card. Seat 1H… that meant I got to turn LEFT when I entered the plane… a rarity for me. Excited, I quickly photographed the two tickets before boarding the plane.

Neck pillow? Not needed. Healthy snack? Untouched. Sleeping mask? The down duvet covered my head just fine. What a way to arrive in Oz!

Travel Maxie warming up my upgraded seat on Virgin Australia.

Barramundi fillet w bok choy, ginger soy. How did they get the skin so crispy in the air? So good!

Scotch w a movie. Love the Sydney Opera House salt and pepper shakers on Virgin Australia. I did NOT steal them, but I thought about it!

Ready for bed? The lovely air hostess reclined the seat (fully), fitted a pad over the seat, then offered a sleep suit or duvet. HEAVEN.

Arriving in Melbourne, the Yarra River

View from my room at the Crown Metropol Hotel. No time for Jet lag!

The bed in my room looked inviting… but I actually SLEPT on the plane! Time to explore…

I jumped in a cab, headed to Chinatown and began searching for Dainty Sichuan restaurant. I first learned about it on an episode of Bourdain’s “No Reservations” and Jonathan Gold also suggested I eat there. Using my phone GPS I found the address posted on the Travel Channel website, but no luck.

Fact: Chinatown Melbourne is the longest continuous Chinese settlement in the western world, dating back to the gold rush days of the 1850s.

Dainty Sichuan had MOVED and the current occupants (another Sichuan restaurant) had absolutely no desire to help me. I couldn’t blame them. How many other Bourdain fans had come knocking with dissapointment?

I tried searching for the new address on my phone, but several addresses popped up and suddenly I was very confused AND jet lagged. So, I turned to my friend Twitter and asked if anyone knew where the original Dainty Sichuan had moved… and yes… a response in minutes!

There were SO many dishes I wanted to try, but since I was by myself I went for the Chongqing Chili Sichuan Chicken. “As seen on Travel Channel”, the server noted! Incredibly spicy, I was suddenly OVER my jet lag.

I spent the rest of the afternoon exploring and photographing Melbourne’s delightful ChinaTown.

Back to the hotel for a refreshing swim before heading to dinner.

Many thanks to  Tourism Australia, Tourism Victoria, Melbourne Food and Wine… and Luke Mangan of course!

If you’re on Instagram, I posted photos every day while in Australia. Just search for #JoBitesOz

If you’re searching for breakfast or lunch near San Dimas, check out Twisted Sage Cafe. My Jonathan Gold scouting report for the L.A. Times.

Filed under Eating Out, L.A. Times

My Orsa & Winston scouting report for Jonathan Gold and the L.A. Times is here. All photos on Flickr. Enjoy!

Le Comptoir at Tiara Cafe (in downtown L.A.) is a temporary, pop-up restaurant by Chef Gary Menes. Peter and I have been HUGE fans of Gary’s ever since he cooked at Marche’, which was our favorite neighborhood spot before it shuttered last year.

I was actually kind of broken-hearted when the Sherman Oaks restaurant closed. Marche’ was our local jewel, our special night out with friends, our proof that the valley had destination dining too.

Chef Menes’ impressive resume includes (to name a few) working in the kitchens of Patina, Palate Food and Wine, and Thomas Keller’s French Laundry. If you haven’t been lucky enough to taste his food yet, email for a coveted counter seat at Le Comptoir before the pop-up ends. Gary’s not only a super-talented chef, but one of the most genuine and kindest as well.

Our beautiful evening at Le Comptoir:

Sunny Side-Up Egg, Young Lettuce Herbs, Sorrel Jus. We mixed the ingredients ourselves, starting with melting butter in the sizzling pan. I love playing with my food!

Dining at the counter, means the BEST SEATS in the house! I could have sat there all evening watching Chef Menes plating dishes. Note: “Le Comptoir” means the counter.

All photos from Le Comptoir

All my photos of Chef Gary Menes’ food!

Reserve Here of via email LeComptoirLA@gmail.com