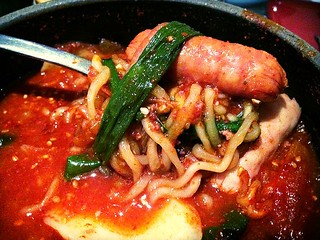 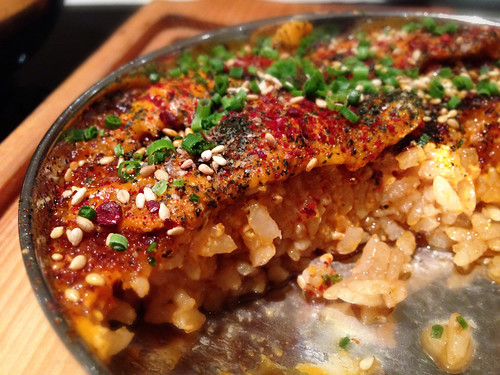 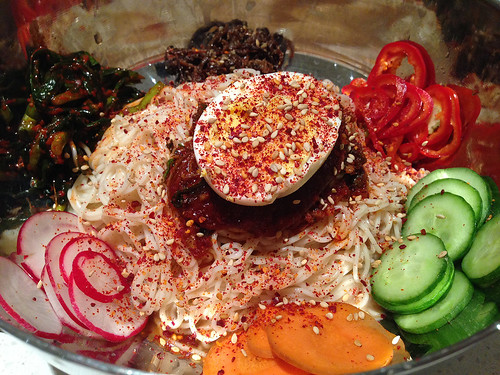 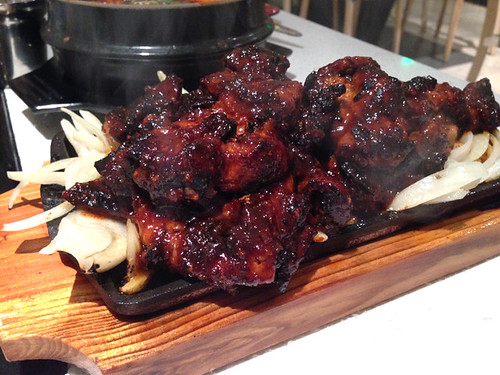 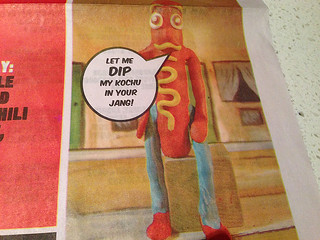 A few days after my friend Haskell’s MAGNUM pop-up event at Biergarten (with Chef Joseph Mahon, link below), my friends Brent & Julie joined me for an early happy hour to try out the regular pub grub. A pitcher of Korean HITE beer was only one cent (yes, a PENNY people!), so of course we ordered a table-full of comforting treats to enjoy with the beer.

Biergarten has an entire menu of just FRIED FOODS (my weakness in life), so you can bet I’ll be going back very soon!

Fried Menu (I need to try the Tempura Fries next!)

More about Biergarten on LAWeekly

No one person has taught me to appreciate wine, like my good friend David Haskell. Like many of his pals, I call him simply “Haskell” because (for me) it rhymes with RASCAL.

My drink of choice, ever since I was a young gal has always been vodka (don’t hate me!). Diet lemonade & vodka on the rocks was always our “house party drink”, due to it’s low carb (and quick buzz) factor. And to be honest, I can’t think of anything sexier than an old-school, super-chilled vodka martini (straight up with 4 olives) at the Polo Lounge in Beverly Hills.

Gin and I have an (almost) irreparable history. A high-school aftertoon jacuzzi party with straight gin & naughty teens (myself included) made me associate the juniper berries with vomit. Mind you, this was THIRTY years ago! Recently at Fraiche restaurant, I was surprised that I actually liked a gin cocktail called St. Tropez. I liked it so much that I asked our server to double-check that it wasn’t vodka! Gotta give some props to Henricks Gin for sure.

The first time I drank wine with Haskell was when he did a Slaw Dogs (yup, hot dogs!) wine pairing for me. It was a really fun afternoon, and I was blown away at how he even took the time to pair the side of onion rings with Aecht Schlenkerla Rauchbier Märzen Beer.

During our lunches at Jitlada Thai, I started to appreciate how special Haskell’s wine skills really are. It’s not just that he knows so much about wine (he worked at Le Cirque and Aquavit in New York, Guy Savoy in Paris) but it’s the WAY he shares this knowledge. I’m still new to LIKING wine, although there are a few bottles I do keep around, like A Mano’s Primitivo or a crisp Bastianich Tocai. Haskell makes learning about wine fun, he’s never arrogant and ALWAYS surprises me and my palate.

Recently, he and ex-Bastide Chef Joseph Mahon started a dining pop-up called “Magnum”. Of course I had to be there to support the rascal, and since Peter was working, I grabbed my best friend Brent for a trek to Biergarten in Korea Town, the location of the first MAGNUM event. Not only was Chef Mahon’s food phenomenal (I never got to Bastide during his tenure), but Haskell’s pairings were out of this world. For the first course he paired a rosé champagne with a carrot pudding and explained that the combined flavors would result in creamsicle. It did (even turning creamy on my tongue), and that was just the start to a fantastic evening. I cannot wait for the next Magnum event!

All photos from Magnum at Biergarten

A few photos of Haskell Pairing Slaw Dogs for me (full post soon)!

**Sadly, this restaurant is now closed**

Pal Cabron was the perfect way to celebrate “National Sandwich Day” (11/3/10), but of course I’d eat this cemita EVERY day if I could!

A cemita is a Mexican sandwich that originated in the city of Puebla. Lucky for me, my friend Bricia owns TWO Cemita shops right here in L.A. (links below). Pictured above: La Cabrona w Quesillo cheese: Beef & Head Cheese

Pal Cabron doesn’t just sell sandwiches (it’s so much more)! A clayuda (or Tlayuda) is sort of like an Oaxacan pizza. I first tried it a few months back with the awesome StreetGourmetLA (aka Bill Esparza). I’m now addicted to the stringy Queso Oaxaca cheese. Pictured above: Clayudas Combinada

Chalupa (6 to an order. You will EAT them)

Thankfully, my friends Julie and Brent joined me for this Pal Cabron FEAST, which included trying out several new drinks from Natura Bar next door. I’m not a fan of sugary drinks (any sweets really), so I really loved the subtle, fresh flavors.

More about the AWESOME Bricia and her brother Fernando (L.A. Times)